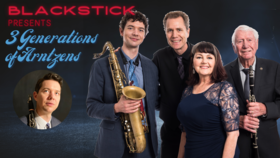 Evan Arntzen, from New York City, will be featured guest on clarinet and tenor. Evan grew up in Vancouver but for several years now lives and plays in New York with many groups, including with Vince Geordano and the Nighthawks. He was also founder of the original BLACKSTICK before he left for the east.

Tom Arntzen will join on piano. Tom has been a fixture in the Vancouver music scene since he was a teenager.

Tom, with father, Lloyd, and son, Evan, established a group called THE THREE GENERATIONS OF jAZZ which played concerts in the Vancouver area and in NYC.

Georgina Arntzen, of the HOT MAMAS, will also be with the band singing the songs of Bessie Smith, Alberta Hunter and others.

Don't miss Blackstick with the Three Generations of Jazz. Come celebrate being together again, and enjoy live jazz in all its glory!