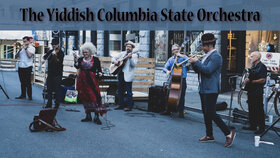 Led by singer Marion Siegel the band has a big, brassy, swaggering sound they exploit to the fullest, with their repertoire of fast danceable music. There are many musical sides to this swinging and versatile orchestra. The band shifts effortlessly from the basic klezmer forms such as freylachs and bulgars to swing and jazz-influenced sounds, with shades of New Orleans style marching bands and even bluegrass thrown in.

Marion’s vocal repertoire takes the band in and out of Yiddish music halls, Greek rembetika, speakeasies, French coffee houses and the caravans of Eastern Europe On stage. This vibrant, exciting group is liable to take the audience on an unforgettable journey that spans many borders!


You can donate directly to the musicians and this venue at ArtsOnView.ca/Donate