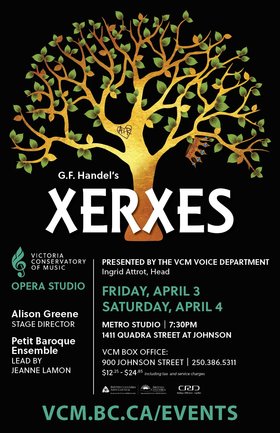 Music: Classical
The Victoria Conservatory of Music (VCM) Opera Studio presents Handel’s great opera Xerxes (Serse), a story of sibling and romantic rivalry in the court of Persia where King Xerxes and his brother vie for power and affection in this comic masterpiece. Xerxes plans to marry Romilda, but his brother is also in love with her. When a former fiancée vows revenge, entertaining complications abound!

With stage direction by Alison Green, musical preparation by Nancy Argenta, a strong cast of singers, and the Petit Baroque Ensemble lead by Jeanne Lamon, this promises to be a a thrilling production!

Opera Studio is presented by the VCM Voice department.