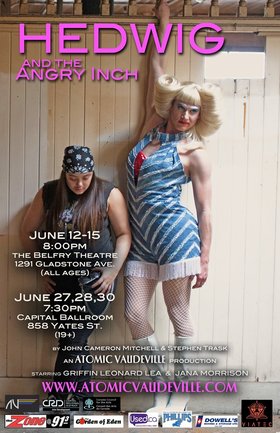 For the past two years, Atomic Vaudeville’s Hedwig and The Angry Inch has delivered the same high-octane energy as seen in their Cabaret Series and productions of The Rocky Horror Show and Ride the Cyclone. Met with glowing reviews, Hedwig quickly went on to generate incredibly positive buzz and a high demand for a return to the Victoria stage!

Hedwig and The Angry Inch tells the tale of how a “slip of a girlyboy” from communist East Berlin becomes the “internationally ignored song stylist” known as Hedwig after a botched sex change operation. The show daringly breaks the fourth wall, as Hedwig (Victoria favourite Griffin Leonard Lea) directly tells the audience of her past tribulations and heartbreak in the form of an extended monologue paired with rock songs. With help from her band and her backup singer and husband Yitzhak (powerhouse vocalist Jana Morrison), Hedwig examines her quest for her other half, for love, and ultimately for her identity. Featuring a groundbreaking rock musical score by Stephen Trask, Hedwig is hilarious, harrowing, and essentially uplifting for anyone who’s ever felt different.

Atomic Vaudeville respectfully acknowledges that we live, work, play, and create on the traditional and unceded territory of the Lekwungen People, now known as the Songhees and Esquimalt Nations.

Please visit atomicvaudeville.com for more information about Hedwig and the Angry Inch and all of Atomic Vaudevilles projects past and present.