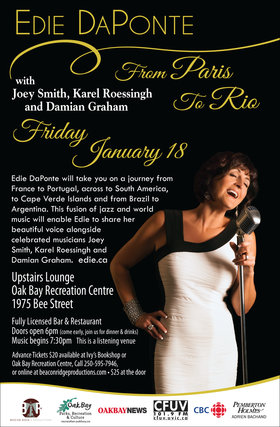 Music: Folk / Celtic / Latin / World, Jazz / Blues
Jazz vocalist Edie Daponte is excited to present her new show, From Paris to Rio. Edie will take you on a journey from France to Portugal, across to South America, to Cape Verde Islands and from Brazil to Argentina. Demonstrating her vocal range From Paris to Rio features songs in French and Spanish, incorporating Portuguese Fado and Bossa Nova classics. You’ll hear numbers from Edith Piaf, Antonio Carlos Jobim, Amalia Rodrigues, Cesaria Evora and many more familiar, and not-so-familiar, tunes.

This fusion of jazz and world music will enable Edie to share her beautiful voice alongside celebrated musicians Joey Smith, Karel Roessingh and Damian Graham. The audience is sure to be transported by Edie’s sultry tones and passionate performance of the carefully selected material in this globally-inspired show.

Equally at home in an intimate lounge setting or an outdoor festival stage, Edie Daponte has established a reputation in the music scene of Vancouver Island and Western Canada as a dynamic and engaging performer. Edie brings passion, playfulness and an evident love of performance to her live shows. Vancouver island Music Awards awarded Edie with "Jazz Recording of the Year" in 2017 for her original song "Island Rain" and nominated her as "Vocalist of the Year" in 2016. Edie's original song 'Ride the Wind' has been nominated in the Traditional category for the 2017 International Portuguese Music Awards (IPMA) . Her album "Young at Heart" was nominated in 2016 for Jazz Album of the year by the International Music Awards.

Emotive and passionate, Edie's voice lends itself perfectly to a wide range of jazz standards, seamlessly moving from jazz to Bossa Nova and back again, switching between English, Portuguese, Spanish and French numbers with ease. http://www.edie.ca

The Upstairs Lounge is a licensed restaurant and bar, doors open at 6 pm for dinner service, the concert starts at 7:30 pm

Anyone who has seen her perform will know that Edie Daponte brings the element of surprise to every show! Her range and repertoire travel far and wide crossing musical genres and spanning multiple decades and languages. She's equally at home in an intimate lounge setting or on an outdoor festival stage, having established a reputation in the music ... more info
Articles: Take a Trip to Paris
Videos: