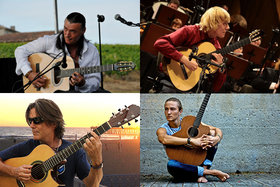 Lulo has built on grand-uncle Django Reinhardt's repertoire by introducing Latin rhythms. Calum has a two-handed style that has attracted millions of YouTube viewers. Marek has performed and written for a variety of orchestras around the world, and Michael has won both the Guitar Foundation of America Classical Guitar Competition and the National Fingerstyle Championship for steel string guitar.

For information on IGN and these artists visit http://www.internationalguitarnight.com

At just 26, Calum Graham has already enjoyed a career that would be the envy of most artists double his age. The Alberta-based guitarist and singer/songwriter has released five acclaimed albums, won major national music competitions, performed at the Olympic Games in both Vancouver and London, racked up some phenomenal views on YouTube, and was mos... more info
Submit info on this show to our admins