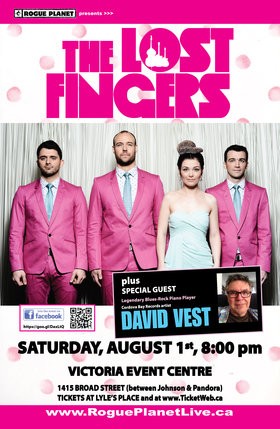 An acoustic trio, the Lost Fingers were based in Quebec City, Canada, and were known for their love of classic gypsy jazz and '80s pop hits. Their shows were a blending of both — seemingly disparate — styles, seeing the band cover hit '80s tunes as well as playing homage to such jazz legends as Django Reinhardt. Their reputation and skill won them a great many fans very quickly, and the group was to be found not too long after forming, playing some of the world's best-known festivals, including a ten-night stand at the Montreal Jazz Festival.

David Vest has been rockin' and shoutin' the blues since 1957. An Alabama native now living in Canada, he is a Maple Blues Award winner for Piano Player of the Year and holds five Muddy Awards from the Cascade Blues Association, including Best Keyboard Player and Performance of the Year (twice). His East Meets Vest recording was named one of the top ten Canadian blues albums of 2012 by the CBC's Holger Petersen.

He played with Big Joe Turner in the 1960s, wrote songs for Tammy Wynette (who sang in his band at one point), toured with Jimmy T99 Nelson and Lavelle White, and backed such artists as Carey Bell and Hubert Sumlin while serving as co-leader of the legendary Paul deLay Band. His album with that group, "The Last of the Best," reached the top ten in Billboard's national blues chart in 2007.

Jimmy T99 Nelson said "I could go all around the world and never find another piano player like David Vest."

This 2009 twice Juno-nominated (“Fan Choice Award” and “Album of the Year”) acoustic trio from Quebec draws its primary inspiration from gypsy jazz icon Django Reinhardt. The Lost Fingers’ debut album, Lost in the 80s, has already achieved platinum-plus status in Canada with sales over 100,000 within Quebec alone! A huge draw in their... more info

David Vest is a five-time Maple Blues Award winner. He is an authentic, Southern-bred boogie-woogie piano pounder and a world-class entertainer, and his live shows are the stuff of legend. He backed Big Joe Turner in the '60s, toured with Jimmy T99 Nelson, Floyd Dixon and Lavelle White, and was co-leader of the legendary Paul deLay Band, sharing... more info
Submit info on this show to our admins