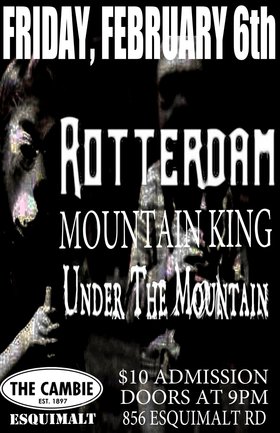 Music: Pop / Rock / Indie, Punk / Metal / Hardcore
When you put two Mountains and a Dam together, you get a flood of awesome and the potential for unbridled power to be unleashed...

South Central Rock Bay Avenue's high priests of all that is unholy make their first appearance of 2015 at the new and improved Cambie Esquimalt. ROTTERDAM have been practicing somewhat and are still tight enough to bring joy and mirth to paying audiences. They have a new cover to debut at this show...start planning on which band name you will yell out in hopes of having one of their songs played in all it's magnificent glory.

Along with The Rotterjerks, are MOUNTAIN KING playing live for the second time ever anywhere in front of a crowd. Yes, they have played plenty in their forklift repair shop jam spot, but this is much different. Featuring members of Bronze, Buzzard, Run Like Hell and Crown The Wolf, Mountain King bring the groove and shake you would expect from a lineup like this...so come shake your mountin' thing to Mountain King.

Not subjects of the Mountain King, UNDER THE MOUNTAIN bring to the show high energy, tones heavier than an obese man who eats lead tacos at each meal and endless groove all the way from Nanaimo BC. A balanced mix of rock and metal, UTM has elements for fans of all the varied intensities of heavy music. They also have actual singing which will be a welcome addition to a bill filled with razor blade garglers.

Rotterdam (Heavy Rock with shades of the South)

Five guys who have been around playing music for more than 70 years combined decided it was time to play in a band that was focused on having a good time and creating music to get mental to. Comprised of consummate professionals, Rotterdam play shows to make organs shake inside intoxicated bodies. Foundations crumble and walls cave in under the t... more info

Under the Mountain (Rock n' roll)

It's scary to think of a world where Rock and Metal music is dead and gone. These days, it seems that Pop music has managed to dig its pink-painted claws into each and every form of Rock music there is. Under the Mountain will have none of it. The Canadian-based four piece hard rock band came together during a time of steady decline of badassdom o... more info
Audio: Thrash, Between My Teeth, One More Line
Submit info on this show to our admins