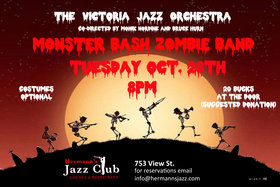 “… solid performance and writing chops.” – Downbeat Magazine Saxophonist Monik Nordine has received several prestigious arts awards including a Juno Award nomination for her work on the album Cruel Yet Fair (1997) with John Korsrud’s Hard Rubber Orchestra and has toured with Hugh Fraser’s band VEJI. Having shared the stage with m... more info
Videos:

Puttin' on the Ritz

Bruce has been an active writer and performer of jazz both locally and internationally. He holds a Masters degree in music composition and theory, and has had a musical career spanning over 30 years. In Canada he has performed with artists such as Michael Buble, David Foster, Rob McConnell, Maria Schneider, The Glenn Miller Orchestra and The Tempt... more info

You never know what this guy is going to make the piano do ... but, it's going to swing! He's got an eclectic set list, a lively presence and elastic voice to match, so prepare yourself for a musical adventure! From jazz classics to Radiohead, he plays the great standards old & new. more info

Pablo Luis Cardenas is a pianist with the ability to play in a multitude of styles each with enthusiasm, skill and finesse. He has a charisma and charm that both intrigues and entertains his audience. This talented musician originates from Cuba and was destined for a life in music after his hands first touched a piano at the age of five. When he... more info

Alfons Fear is a versatile trumpet player. A native of Victoria, Alfons performs jazz, classical, and contemporary music. He has a B.Mus. (2014) from the University of Victoria majoring in music composition and a diploma in jazz studies from Humber College (1994). At UVIC Alfons studied composition with John Celona and studied trumpet pedagogy with... more info
Submit info on this show to our admins