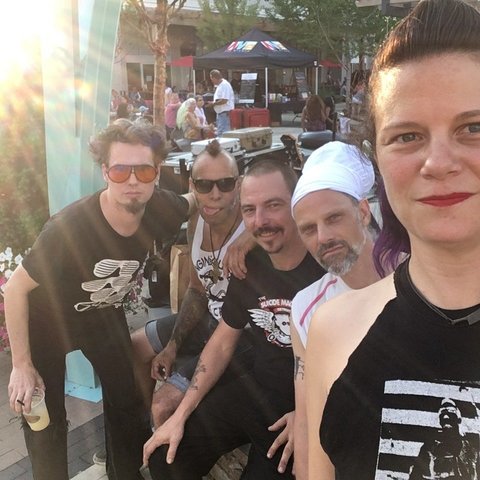 Event Photo Galleries (1)
Punky reggae rockers from Baltimore whose infectious energy keeps the party jumping all night, The Scotch Bonnets have been bringing the heat and the good-love vibe since their debut in 2009. The crew is fearlessly lead by singer-guitarist Kristin Forbes aka Lady Hatchet, whose tunes blend classic Jamaican groves with a funky fresh approach to American singer-songwriting. The Bonnets self-released their debut album Live Ya Life in 2012 and dropped Quest in 2014, an EP done in collaboration with their legendary friend HR of Bad Brains. In April 2015, the band supported and backed guitarist Roddy Radiation of The Specials on a tour of the eastern states. That same month, the Bonnets released a video for their contribution to Hooligans United, a Smelvis Records’ tribute to Rancid.


Last year, the band released The District, their first 7” on Jump Up Records, along with their second video for its A-side. They also had a song released on Recutting The Crap, a Crooked Beat Records’ LP that reinterprets The Clash’s swan song, Cut The Crap. The Bonnets had the privilege of recording their track at DC’s punk pantheon Inner Ear Studio with owner Don Zientera. They also have a track on Baltimore Does Bowie, Morphius’ upcoming tribute to David Bowie, and their second full-length album will drop this year. The journey is continually evolving for these reggae cats, mee-yowza!
No audio samples have been linked to this profile.
No member roster has been entered (to link to musician profiles.)
Status: Available for Shows/Gigs
- Last confirmed Apr. 2, 2019
Submit info on this band to our admins