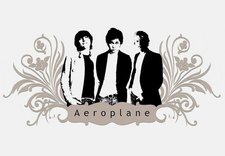 info@aeroplanemusic.net
Contact Info
Past Shows (13)
Julian Bakker (bass, keys, vocals), Paul Cimolini (vocals, guitar) and Brad Wood (drums, bgv) are "Aeroplane", a 3 piece band from Vancouver Island specialising in a unique brand of pop/rock. Among their many influences are Supergrass, XTC, U2, Coldplay, Oasis and The Talking Heads. They have only been together since August 2005, but their combined experience boasts opening shows for Alanis Morissette, The Goo Goo Dolls, The Trews, Wide Mouth Mason, The Moffatts, Not By Choice, Social Code, Grady, Holly McNarland, The Waking Eyes and The Cowboy Junkies.
Much has happened in the years leading up to the formation of Aeroplane. Julian and Paul started playing together in the summer of 2000 until the fall of 2001 when Paul left for Calgary to join Bob and Clint Moffatt (formerly of The Moffatts) in their new band "Hidell". Highlights of this venture included playing at the 2002 Winter Olympics in Salt Lake City Utah, and recording a full length album for Capitol Records. Meanwhile, Julian pursued a career in production, working with artists including "Spirit of the West" as well as "Hidell". In the meantime, Brad was busy making a name for himself as a drummer in the island music scene.
Their first self produced EP was released in April 2006, and the band is currently finishing recording a new batch of songs for a full length album to be mixed by Jim Blair, of www.dyingdream.com
No audio samples have been linked to this profile.

Status: Unknown
- Last confirmed Jan. 6, 2007
Submit info on this band to our admins