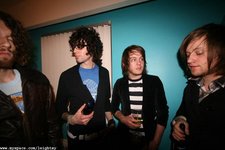 alpha-baby@hotmail.com
Contact Info
Past Shows (17)
Alphababy was conceived in the late weeks of summer 2005, in their hometown of Kelowna, British Columbia. The group began as: Vincent Jones (drums, percussion, vocals), Jeff Innes (bass guitar, synthesizers, piano, vocals) and Brandon Scott (guitar, vocals). Alphababy met each other through BCs musical community and began playing together after leaving their previous bands. Their sound shows immediate evidence of maturity by concentrating on catchy melodies, captivating piano lines, and an energetic live show involving unique three-piece harmonies.
During the past year the band has worked and toured throughout western Canada and has had the privilege of sharing the stage with such acts as MINUS THE BEAR, MAGNOLIA ELECTRIC COMPANY, LADYHAWK, BLOOD MERIDIAN, SHINY TOY GUNS, YOU SAY PARTY! WE SAY DIE!, CHET, BEND SINISTER and THE MELIGROVE BAND, RAISING THE FAWN, IN FLIGHT SAFETY.
The band is planning a cross Canada tour to promote their recently recorded E.P. Engineered by Colin Stewart at the HIVE Studios in Vancouver, British Columbia, set to be released this fall.
No audio samples have been linked to this profile.

Status: Unknown
- Last confirmed Jan. 4, 2007
Submit info on this band to our admins