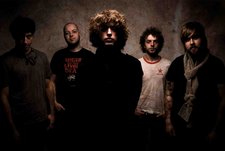 Jay Bhattacharyya
italianedition@gmail.com
(250) 588-3908
Contact Info
Past Shows (63)
Event Photo Galleries (1)
"Begun three years ago as an antidote to spare time and money, Italian Edition has struggled to maintain a strong presence in their hometown of Victoria BC, as well as across Canada. Bound together by a love for live chaos and honed songwriting, Jay Bhattacharyya, Jack Derricourt, David Sponaugle, David Williams, and Joshua Sparrow have forged a unique strain of twenty-first century music; their sound comprises a collection of tastes, from classic guitar rock, to post-hardcore, to jazz. So far, their career has proven no less ecclectic--being featured on Much Music's Going Coastal, playing alongside the likes of Tokyo Police Club and Three Days Grace, and receiving regular airplay on CBC Radio 3. With two albums under their belts--2007's "The Fable of the Mouse and the Frog" and their newest full-length "Luddites"--the five spirited islanders show no signs of slowing down, with nothing but fresh enthusiasm paving their way."
No audio samples have been linked to this profile.

Status: Broken Up
Give us a stage, and we will give you rock. - Last confirmed Nov. 29, 2009
Submit info on this band to our admins