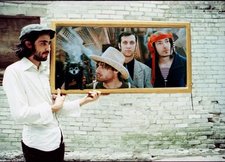 Olivier Sirois
Os@opakmedia.com
1.514.272.5885
Contact Info
Past Shows (16)
Event Photo Galleries (1)
This Montreal-based art-rock quartet exploded onto the Canadian and international scene at the end of 2006 following the release of their album Close To Paradise. This group ha proved in a very short period of time that they are among the best on a growing list of Canada's promising musical exports. Patrick Watson has long since collaborated with Simon Angell whose soundscapes and noise-influences have developed into the perfect complement to Watson's colourful melodic compositions and gut-wrenching falsetto. Also featuring Mishka Stein and Robbie Kuster rhythm. This group has performed at the 2007 Juno Awards and was also nominated for a Juno for New Artist Of The Year.
No audio samples have been linked to this profile.

Status: Unknown
- Last confirmed Feb. 26, 2007
Submit info on this band to our admins