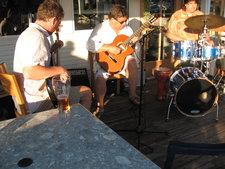 Mike Lefevbre
mikelefebvre_nazca@hotmail.com
778-426-0217
Contact Info
BIOGRAPHY
Peter Hurni is a recording artist and performer with more than thirty years experience. Peter plays Jazz, Fusion, Latin, and Funk Music and has played with many different bands over the past three decades of his musical career.
Born in Bern, Switzerland, Peter is a veteran performer throughout Europe and North America. Touring with his multi-award winning group "Birdland", he has been featured at the Jazz Festivals in Montreaux, Bern, Luzern, and Zurich in Switzerland, Leverkusen in Germany, Paris, France as well as Belgrade, Zagreb, Sarajevo and Novi Sad in Yugoslavia. In North America, Peter has performed extensively, particularly in Los Angeles, Vancouver
and throughout Alberta.
To his credit, since 1980, Peter has recorded twelve albums. Living in Canada since 1987, Peter has been actively performing and recording in Calgary, Banff, Canmore, and throughout Alberta, both with his own musical ensembles and projects and as a freelance artist. Peter is a member of the Calgary Musicians
Association and C- Jazz.
No audio samples have been linked to this profile.

Status: Unknown
- Last confirmed Mar. 27, 2013
Submit info on this band to our admins