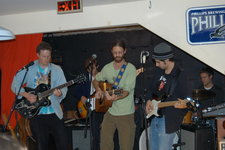 Dennis
crowsfly@hotmail.com
250-891-3109
Contact Info
Past Shows (10)
As the Crow Flies is a band that can fill a room with living sound. Their poetic lyrics, swelling harmonies, tight arrangements and skilled improvisational jams have been opening the hearts and enervating the feet of audiences for over a year. Playing packed shows to extremely appreciative crowds, in venues as seemingly disparate as the Victoria Folk Society's Sunday night Norway House acoustic showcase, Logan's Pub, the Fernwood Inn, the Upstairs Cabaret and the Esquimalt Cambie for over a year, this band has carved a solid name for itself around Victoria.

The band got started hosting jams with Dylan Stone at the Ocean Island Backpackers Inn.
There Adam Cleland was ripping it up on the banjo and electric/acoustic guitars every Tuesday night, tastily accompanying anything tasty and wowing crowds while taking the helm. When Cleland and Stone heard the songwriting and vocal delivery of Adam Reese, a strong musical connection and friendship was formed. Each shared an affinity for songwriters and bands such as the Grateful Dead, The Band, Bob Dylan, Phish and Wilco. With the addition of Bryce McBride on drums and Dennis Siemens on both upright and electric bass, the group found itself able to play a unique synthesis of genres that they have taken to calling “psychedelic indie-folk country-rock”. Many of their original songs are populated with the people and street names of Victoria, and the grooves definitely roll with the resonance of ocean, mountains and swaying prairie grass. This is a band that leaves you feeling warm and gladdened, as if you had just flown in the guise of a crow from shaggy western shores to the dun flatlands outside Drumheller, with a long-setting sun at your back.

The line-up includes Adam Reese, vocals and acoustic guitar, Dennis Siemens, electric and upright bass, Adam Cleland, vocals, banjo and electric/acoustic guitars, Dylan Stone, vocals , slide and rhythm guitar, and drummer Bryce McBride. Together they make an unstoppable force and a must-see band.
No audio samples have been linked to this profile.
No member roster has been entered (to link to musician profiles.)
Status: Unknown
- Last confirmed Sep. 27, 2010
Submit info on this band to our admins