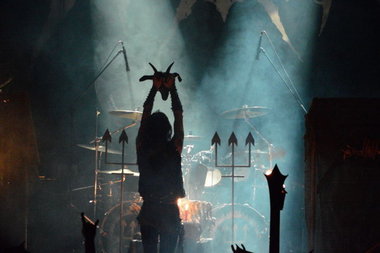 Partnering the old guard with the new for a night of total aural devastation and devilish devotion, January 2015 sees the return of legendary Norwegian originators Mayhem alongside Watain, the band often harkened as the invigorating force of contemporary black metal. Throw in Canada’s very own raw black/death metal warriors Revenge, and you have an utterly deadly and destructive concoction that descended on Vancouver’s eager hoards for a night that would prove an exemplary display of extremity and chaos…

Revenge begin proceedings by offering their unbelievably raw and stripped-down barrage to an already packed Rickshaw Theatre; the venue’s early atmosphere and impressive audience highlighting the sheer excellence of tonight’s bill. The Albertan three-piece approach their set with ferocious abandon, from Vermin’s venomously spat vocals and viscerally abrupt soloing, to James Reads’ signature raging drum assault. Veering from a blasting wall-of-noise to primal bursts of simplistic yet punchy riffing, the band executes their primitive death metal with precision and a commanding presence, turning the pit into a sea of frantically pumped fists and captivating the fringes of the crowd. Leaving the stage as abruptly as they began, Revenge’s visceral performance proves to a perfectly raw commencement of the night, complementing a night of ritualistic black metal and dense atmospheres with their no-nonsense raging sound.

Next up are Watain, who transform the Rickshaw into an occult horror-show with their stage decor, complete with skeletons, inverted crosses, and Erik Danielsson’s darkly devotional initiation of their set. The crowd delight in the display, and as the band rip into ‘Death’s Cold Dark’ the Rickshaw audience are enamoured by their host’s demonic presence and Venom-esque punkish attitude from the off. Unleashing a set list spanning their discography, the corpse-painted band is undeniably more engaging than during their appearance on this same stage in 2014, benefitting from a greater clarity in sound and a more theatrical performance, with the presence of session bassist Alvaro Lillo enabling Danielsson to revel in his diabolical stage exploits and evocative vocal delivery. With this freedom the front-man has an undeniable charisma, prowling wide-eyed about the stage and energetically leading his bandmates charge as they offer up their brand of anthemic, infectious black metal. While they are perhaps the least vicious, grim and underground in terms of sound of the modern black metal bands, Watain’s reputation rests on their theatrical and overblown sense of grandeur; an element that becomes all the more effective in a live setting, and that has and that clearly resounds with a broader audience than that of most contemporary black metal. As the final notes of ‘Malfeitor’ resound around the Rickshaw before Danielsson closes their ritual Watain’s magnetism reaches its peak, simultaneously demonstrating that while detractors may criticise the band for their distinctly un-underground sound and approach, Watain’s live presence and capacity to evoke such an unholy atmosphere vindicates in the least their reputation as a formidable musical force.

And then it’s the turn of the living legends to take the stage, the infamous personalities of early-90s Mayhem standing alongside new guitarists Teloch and Charles Hedger. The current manifestation of the band strike an impressive figure on stage and with Attila appearing as demented as ever as the band careen into ‘Deathcrush’, even the most stubborn of purists would fail to be unconvinced by their present power, with Csihar’s inimitable vocal delivery bringing yet more insanity to the unbridled violence and aggression of the track. Mayhem continue on through a hypnotically dense set, with the somewhat varied content of their discography coming to the fore as they couple the schizophrenically snappy guitar and drum attack of tracks from ‘Chimera’ and ‘Ordo ad Chao’ alongside the frigid and unmistakably imposing sound of classics from ‘De Mysteriis Dom Sathanas’. Sharing the centre-stage, Necrobutcher and Atilla form an oddly opposing pair, the bassist clearly revelling in the mayhem and interacting with the crowd with signature sneering charisma, while Atilla appears immersed in an isolated catharsis. The incomparable bombardment of Hellhammer’s Olympian drumming shines through on ‘Buried by Time and Dust’, with the drum riser steeped in shadow bringing a very real darkness to the stage. Although the audience has thinned slightly, it remains captivated in the presence arguably heavy metal’s most notorious act, and as the frigid riff of ‘Freezing Moon’ erupts from the speakers, fists hit the air in response to one of Norwegian black metal’s landmark anthems. Closing the set with another Deathcrush track, ‘Pure Fucking Armageddon’ rings out through the Rickshaw, its punkish vibes, malicious attitude and aural chaos providing a chaotic and appropriate conclusion to a night of total death worship. As Mayhem leave the stage to resounding cheers and a satisfied crowd disperses, it’s clear that the Black Metal Warfare Tour will not be one soon forgotten.